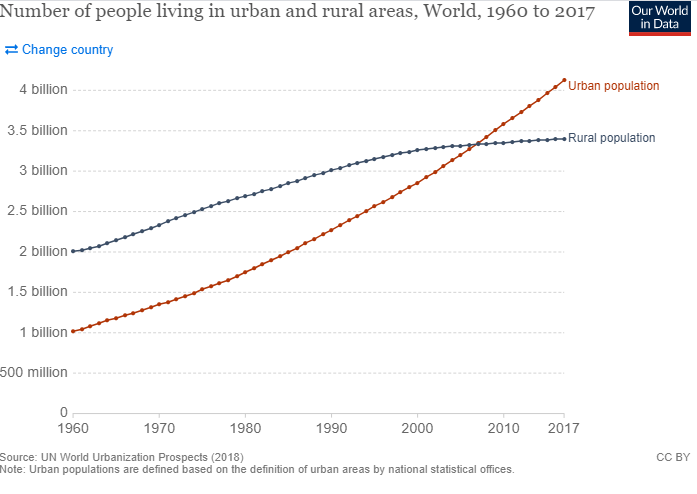 This trend, coupled with a summer Surface Urban Heat Island (SUHI) effect of 1.9°C and winter SUHI of 0.87°C (USA results \({[^4]}\) ) demonstrates that the majority of humans are living in environments that are warmer than the natural surroundings. So, increasing temperatures experienced in urban environs are well above the warming which has been measured by means of the global averaging method used to measure Global Warming / Climate Change. It thus logically follows that urban environs are likely to be the “bleeding edge” with regard to the impacts of climate change, being measurably hotter than the surrounding natural environment in which they are located.

Urban environments are also, by definition, the environments with a higher human population density than the surrounding rural environs. This creates a unique motivation to solve the problem. The problem has been framed as Anthropogenic Climate Change – the human factors driving the change in climate. Thus, the place where the problem is greatest in terms of direct temperature measurement is also the place where the most direct human activity, and thus CO2emissions, occurs. It would seem that a solution that directly addresses the behavior of the problem at source would be advantageous. The problems of urbanization have long been recognized by the architectural profession. The concept of the vertical city is an attempt to address this.

The Vertical City project \({[^5]}\) represents the views of some of the pre-eminent architects around the globe, with experience in delivering some of the tallest structures ever built. The guiding philosophy is aimed at sustainability, with a view to having the structure contributing to the energy supply of in-building requirements. The CHE proposal builds on that vision by proposing a structure that does not just minimize environmental harm, but actually adds to environmental health by reversing anthropogenic effects on the environment as well as catering for its own needs.

The depiction of the CHE in Fig. 4 represents one example of the technology required for the proposal to function as described. The vertical CUTs are lined with fabric to allow for the movement of a compressible gas without structurally stressing a rigid envelope which would be subject to large forces with relatively small pressure fluctuations. This design approach leaves the perimeter of the structure exposed to wind loads, which the proposed fabric lining of the CUTs will be unable to withstand. The problem of protecting the CUTs with a robust perimeter can be solved by building a perimeter comprised of accommodation units, not unlike a conventional high-rise building. This solution turns the CHE into vertical city as envisaged above, with the added benefit of producing surplus power and water.

So, how does the CHE change urban behavior?