This Page is Under Construction #

In order to understand how the CHE works, we have to start from something that is generally well understood – the Hot Air Balloon. It consists of the following key components:

– a volume of air that is warmer (less dense) than the surrounding ambient air.

B. The Heat Source #

– a source/reservoir from which to heat the Balloon to above the surrounding ambient air temperature.

– the load lifted by the Balloon that is heavier than the surrounding ambient air.

– connecting the Basket to the Balloon

The goal with what follows is to connect elements of the CHE to the Hot Air Balloon in order for you to gain an understanding of how it works. 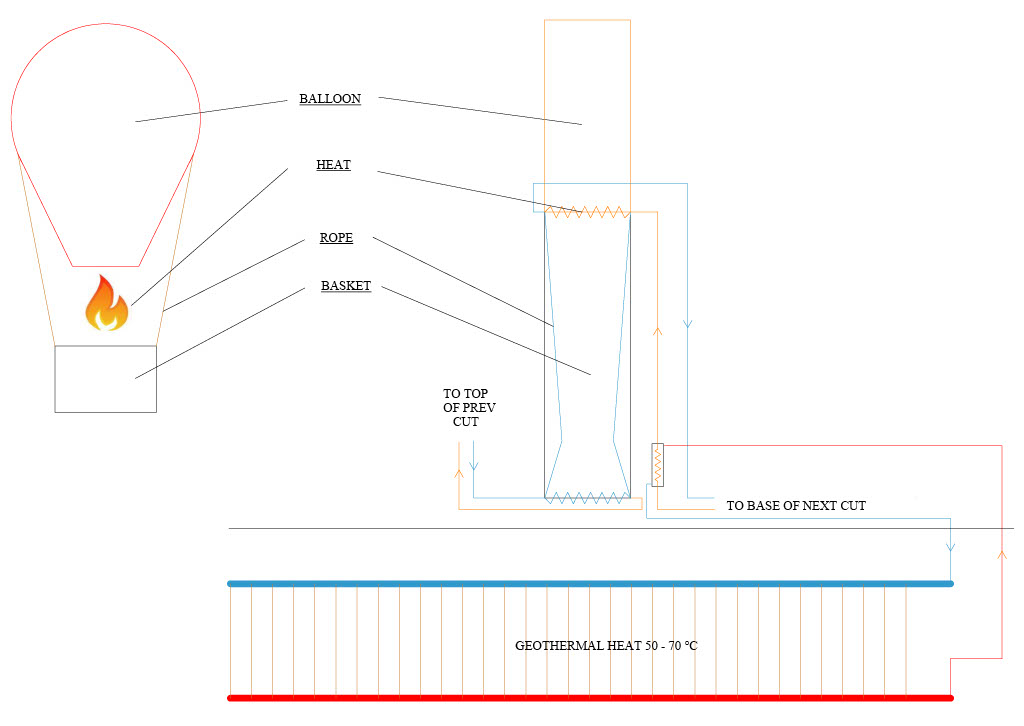 Now, having shown that it is possible to create convective uplift using ground level heat transferred to a higher altitude, and that such convective uplift can lead to further cooling within a CUT, we can show you with the following presentation that CUTs can be coupled together consecutively to create even further cooling. The more CUTs that are coupled together, the more cooling is achieved.

Now we have to understand the benefits of cold air. A few other widely understood propositions are required:

So now we can see two potential uses for our CHE. Warm ground level air is drawn into the CUTs and cooled as they enter the bottom. Once they are cooled down enough, the water vapor in this air will condense into liquid form (just as in an A/C system). This condensation occurs directly on the heat exchanger surface (as in an A/C system). Mist also forms in the CUTs as the cold air is further cooled as it rises up the CUTs. The CHE thus produces water condensate out of the ambient air – very much like an A/C system does.

How these CUTs are designed (sized) and connected together is not straightforward – it requires careful calculations for the correct dimensions to be established. To see how this may be done, see here.

From this description it can be seen that our CHE has components very similar to other Heat Engines, like thermal power stations. The warm ground level air acts as a boiler / evaporator in that it favors the formation of water vapor from liquid water in the environment. The cold air that is generated by the CHE uplift processes in the CUTs act as a condenser – both by turning the water vapor in the CUTs into fresh liquid water for use as needed, as well as serving as an efficient low temperature condenser for a thermal power plant for electrical generation.